Historically speaking, going back as far as ancient Egypt, Justice has been symbolized by a set of scales.  The reason for this is the widely held recognition of the fact there are always two sides to every dispute and that for justice to be done, a judge must consider both sides.

As a Law student, the image of scales continually haunts me.  In order to do justice, any        legal dispute must be judged according to the following fundamental principles:

Many great minds have laboured over the Israeli-Palestinian conflict seeking to bring a just solution.  But, as with every conflict, one must adhere to the principles necessary for the implementation of justice.  The BDS movement, however, does not adhere to these basic principles.

The BDS movement preaches, ‘Say no to normalization,’ a boycott of any event that seeks to ‘bring together Palestinians/Arabs and Israelis so they can present their respective narratives and perspectives or to work toward reconciliation without addressing the root causes of injustice’ (BDS Website).  In doing so, the BDS movement is attempting to redefine justice by narrowing it down to its own narrative and creating a monopoly on the truth.  This is a blatant violation of the principle of impartiality.  In doing so, they are weighing down on one side of the scales and attempting to outlaw any evidence that would add weight to the opposing side.  They say that any attempt to achieve a solution that doesn’t follow their definition of ‘the roots of injustice’ is intellectually dishonest.  As someone who has grown up in a conflict zone and is a student in the academia, this comes across as a very problematic statement.  Just because someone sees through a different lens, does that make them intellectually dishonest?  Who granted the BDS movement the authority to decide what is or isn’t intellectually dishonest?  Such a statement seems to be academic imperialism and reminds me of Orwell’s thought police. 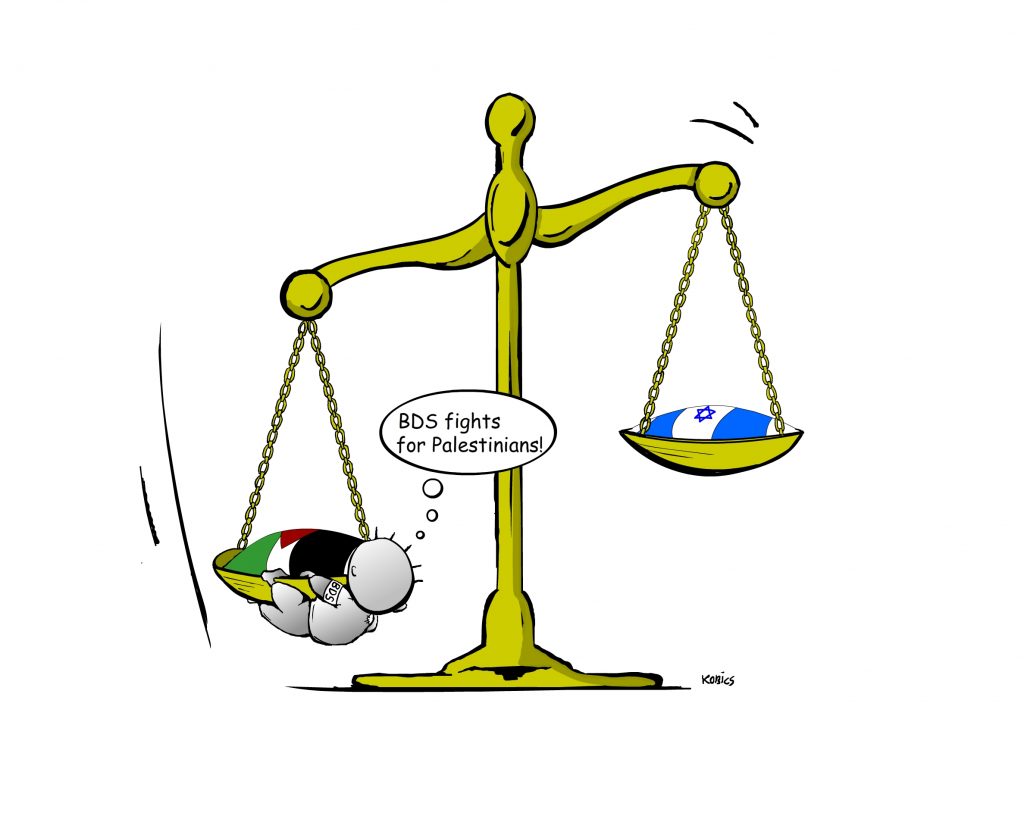 The BDS movement calls for a boycott until Israel meets three demands that they claim are the ‘roots of injustice’ (BDS Website):

These are seen to be a precondition for any type of cooperation.  In holding this approach, they are violating a number of the aforementioned basic principles for justice.  It limits alternative solutions, doesn’t monitor the conflict in light of the current circumstances and needs of the people, nor does it take into account the implications on the people of the region.

There is a fundamental assumption that there is no other way to finding a solution other than the solution suggested.  Boycotting or not allowing sides to examine alternatives is the violation of a basic principle of justice.  This is so problematic (and frustrating) because it limits or even prevents the ability of the Palestinians, the Israelis and the international community to take into account all of the interests of those involved. Automatically boycotting solutions based on dialogue, on political cooperation or economic cooperation doesn’t empower those seeking a solution, it merely limits them.

The circumstances: The fact that there are over seven million Palestinian refugees living outside the country must be seen in light of the approach to refugees according to international law and the ability to incorporate refugees into different communities.  Is it a proportionate measure to expect the return of such a large number of refugees seventy years later?  Furthermore, in seeking a just solution, it is essential to recognize the existence of the Jewish State that currently provides refuge to millions of Jewish refugees from around the world.

The implications: Calling for the Right of Return of 7.25 million Palestinians doesn’t take into account the right of the Jewish people to sovereignty and the fact that such an action would bring an end to any form of Jewish State.  Additionally, the BDS campaign ignores the fact that boycotting Israeli companies and cooperation with them both takes away jobs from Palestinians and prevents the building of bridges between Jews and Arabs – as this is seen as ‘getting in the way of the resistance’.

In this article I am not justifying every action taken by Israel.  However, I am pointing out the large amount of harm brought about by the BDS movement, which in the name of justice is actively going about to pervert the course of justice and undermine any form of the rule of law.  To do justice one must balance the evidence on both sides of the scales and only then make a judgement.  One must do so by taking into account the circumstances of the matter, the implications of the actions involved, and alternative courses of action that can be taken.