My Encounter with Hatred: A Student in London
teamjij
Monday 11/06/2018

The first time the BDS movement caught my attention was on April 27, 2017.  The date is etched into my mind because up until that day, I’d always thought of anti-Zionism as the ‘pet hate’ of the Jewish community, the enemy that we need in order to justify ourselves and to make excuses for ‘security measures’.  Like Jews of many generations, I preferred to focus on the challenges of day-to-day living and not look at the totally irrational hatred being spread against me and my people.  The basic rationale of my thinking was that Jew-hatred and Zionist-hatred doesn’t make sense, therefore it can’t be such a big problem.

I had been accepted to start studying in one of the major London universities and was at the university to make inquiries regarding my enrollment.  My head was held high because I was proud to have the opportunity to be educated in this well-reputed institution.  As I walked through the campus, I was intrigued to hear the sound of drums and people shouting.  Slightly surprised but being compulsively inquisitive, I drew near to see the meaning of the rowdiness in civilized London.  It didn’t take long to recognize – the Palestinian flags and chants immediately flooded my mind with memories of having stones hurled at me while on duty in the West Bank and pictures of one of my soldiers who got hit by a massive rock in the chest while overseeing a demonstration.

Taken by surprise, I walked amongst the protestors.  Seeing people from a whole range of ethnic backgrounds, I attempted to fathom what was going on behind the aggressive shouts. “From the river to the sea, Palestine will be free!” and “Israel is a fascist state!” were chanted by the sea of protestors.  What was the meaning of all this?  It turned out that the protest was against the Israeli Ambassador’s speaking on the university campus – as this invitation was seen to be ‘provocative’.  They wanted the university to boycott the speaker because the speaker represented Israel, which they saw as being an evil occupier.  It was chilling to think that in the middle of London, people were openly advocating for the end of the State of Israel, ‘from the river to the sea’. 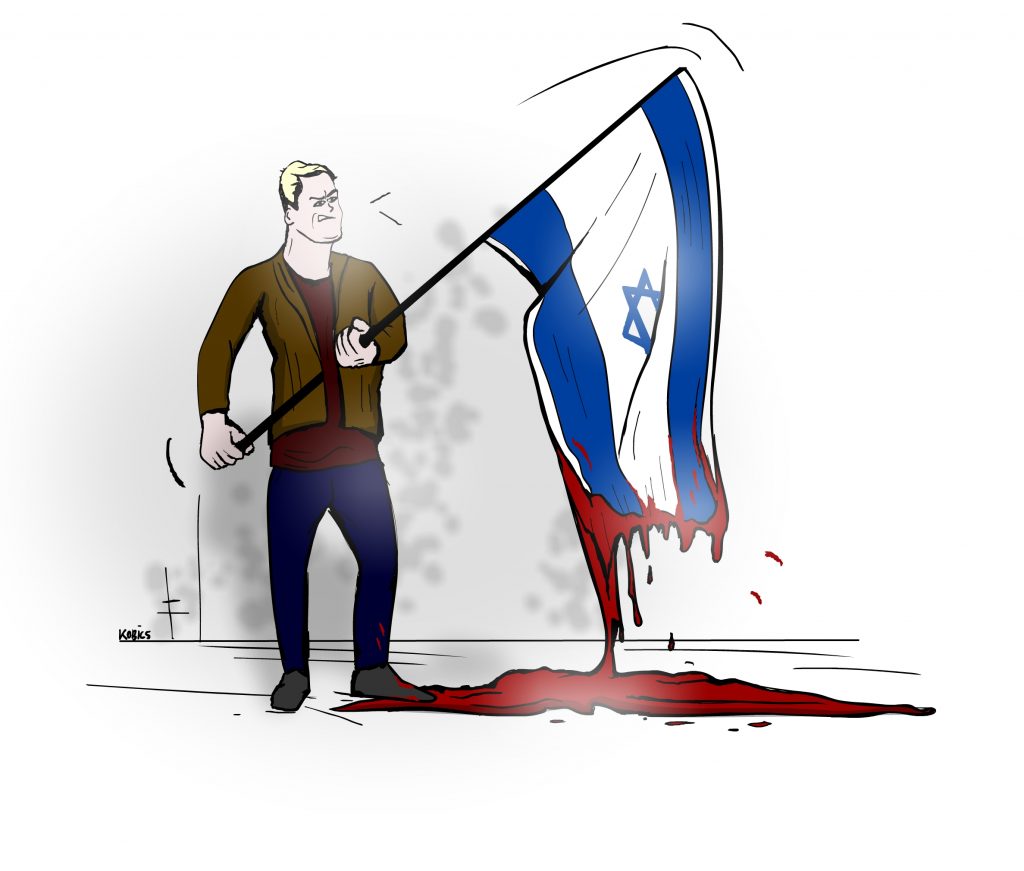 Even though I found it difficult to hold my resolve together amidst those who were in essence denying my identity as an Israeli, I have always been taught of the importance of listening to the other side and to be willing to admit when I am wrong.  So, I stuck around and wandered between the protestors, asking them what they knew about the conflict and trying to understand why they were so worked up.  Most of the answers I got were that the Palestinians are being butchered by the Israelis and that we all need to do everything we can to fight the ‘evil occupation’.  These 19 and 20-year-olds who had been educated that Israel is an evil-colonialist venture, seemed surprised when I told them I had just finished my service in the IDF as an Officer in a Combat Unit and that I was a relatively normal human being, not thirsty for Palestinian blood.  When asked if I’d given my testimony to “Breaking the Silence” – an organization of former IDF soldiers who testify to having been forced to commit violations against Palestinians – I responded that I hadn’t because I didn’t have any violations to report: my commanders were men of integrity, amongst the most moral people I know, and I had always taught my troops to have value for all human life – Jew, Arab and everyone else.

Sadly, the protestors didn’t seem to care very much for talking, the atmosphere wasn’t one for talking or thinking – rather, one of being joined together in the anti-Israel mob.  As I politely approached individuals to ask them questions about the implications of their demands on the Jewish people, I was angrily brushed aside.  It reminded me of drunk fans cursing a referee at a football match or scenes from Gladiator at the Colosseum – the chants and drum beats working up ‘anti-emotion’ against Israel and her Ambassador.

The hardest part of the protest for me was seeing the protestors take an Israeli flag, dipping it in red paint and waving it around.  The Israeli flag is designed to remind one of the Jewish prayer shawl, and to me it represents the hope of the Jewish people for sovereignty.  This blatant desecration of the flag cut me to the heart. I don’t hate Palestinians, and I would never desecrate a Palestinian flag.  I don’t agree with all of the policies of the Israeli government, and I sincerely desire peace.  When people I know in Israel try to delegitimize the rights of the Palestinian people, I speak up.  What good can come of desecrating my flag – making it look like it’s dipped in blood?  I wanted to scream and shout and let out all the scorn and insult that this caused me, but I realized that I was helpless.  I could do nothing.  Letting out my anger would only be adding gasoline to the flame of hatred against me and my nation.

After the protest, I was left with a lot to process.  Emotionally and mentally drained, I left the campus to do some serious soul-searching.  Why so much hatred?  Why is the BDS movement so intent on drowning out other voices (my voice)?  They say that I’ve been brainwashed, even though I’m willing to try and listen to them.  Could it be that they are brainwashed?  Should determining who is right or wrong in a conflict be decided in a shouting match?  Is the populistic mob-like behavior I experienced in London the way forward?

After these experiences I was challenged to read a book by Ilan Pappe and Noam Chomsky explaining the BDS movement claims, and as a result I have become more aware than before of the need for personal and Israeli self-criticism.  But alongside this, I have become concerned about the BDS movement, the amount of irrational hatred it is spreading, and its means of achieving it.  Two wrongs do not make a right.  Trying to prevent dialogue and attempting to drown out voices is not going to bring justice, reconciliation, or hope – it is merely going to make people hate more.  I’m only 26, but I’ve seen enough hatred in my life.  I hope most people will agree with me that we don’t need any more hatred in our world.