The water crisis in Gaza is center stage for the Agricultural Development Association (PARC), a Non-Governmental Organization headquartered in the Palestinian territories. PARC’s mission statement is to “develop the agricultural sector, strengthen the resilience of farmers, reach out to the poor and marginalized groups and their CBO’s and to to contribute to the establishment of a free and democratic Palestinian society with the values of social justice.” PARC received €1,497,567 from the European Union (in 2016 alone) to fulfill its goals. What did they do with this money? PARC invested that money on a campaign to boycott Mekorot, Israel’s National Water Co.

Water is one of the basic necessities for life. Humans can only live without water for 3-4 days. Israel receives an average of 22 inches of rain annually. This may sound like the average amount for most temperate climates of the world, but virtually all of that rain falls during the winter months, and it mostly falls in the northern part of the country. If you are in Jerusalem, the West Bank, or Gaza during the summer months, there is no direct access to natural drinking water. What are people supposed to do if there are only unreliable natural sources of drinkable water? 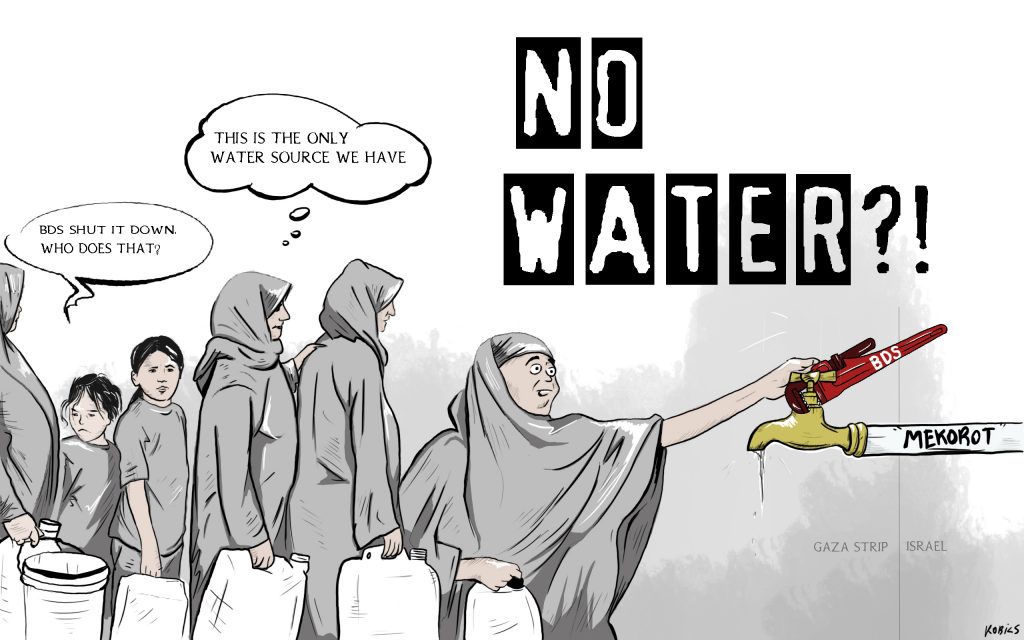 When the modern Jewish State formed, millions of Jewish immigrants flooded the country. Israel needed to create some way to collect large amounts of drinking water for its growing population. Through incredible feats of technological innovation, Israel has been able to thrive in a harsh natural environment. One of the major ways Israel acquires drinking water is through desalination: treating sea water and turning it into drinking water. Desalination accounts for 42% of all drinking water provided in Israel. Another large source of drinking water comes from piping in water from the Sea of Galilee (the only freshwater lake in Israel). The Sea of Galilee is on the northern end of Israel and requires hundreds of miles of piping in order to reach Southern Israel. Israel also saves water by recycling sewage water, treating it, and reusing it for agricultural purposes. Mekorot owns and operates most of the plants that desalinate, transport, and treat these sources of water, supplying Israel with 90% of its water.

The Gaza Strip receives a great majority of its water supply from its Coastal Aquifer Basin. Overtime, the coastal aquifer has become an inadequate source of water for Gaza. While normally aquifers are self sustainable, sustainability only works if water is taken out at a rate equal to the replenishment rate. The annual quantity of water that can be pumped without compromising the aquifer’s ability to renew itself is approximately 50-60 million cubic meters. Unfortunately, between a rapidly growing population, and outdated infrastructure and agricultural techniques, about 200 million cubic meters of water are pumped every year. This excessive use creates a vacuum in the aquifer that allows sea water from the Mediterranean Sea to seep in and contaminate the aquifer, polluting the drinking water. The rest of the water consumed in Gaza is imported from Israel. Mekorot sells about 10 million cubic meters of water to Gaza every year.

With 97% of drinkable water from the aquifer being polluted, the World Health Organization reports that in five to ten years, Gaza will be unlivable. This clearly marks an urgency in correcting the water crisis that Gaza is facing. Unfortunately, whereas PARC wants to blame Israel for the water crisis in Gaza, the real perpetrator is the Palestinian government of Gaza. The European Union and the United States have collectively given millions of dollars to the Palestinian Authority to fix their water crisis. This money could have been used to repair their water treatment plants, to build desalination facilities on the coast, or to rebuild infrastructure to minimize the amount of wasted water.

International Aid is clearly not being used to help the residents of Gaza who are suffering. Where does that money go? Since Hamas (a terrorist organization) took control of the Gaza Strip, fights between the Palestinian Authority and Hamas leaders make the exchange of that money impossible. Furthermore, Hamas uses the money it does receive to fund terrorist activity: buying weapons and military equipment, and launching rockets at Israel, instead of investing in life saving infrastructure. Since the Palestinian authorities are compromised, the only reliable source of water going into Gaza is water imported from Mekorot. By campaigning to boycott Mekorot, PARC puts in danger the Palestinian people that it is vowing to protect and support.