The recent decision of the U.S. to withdraw from UNESCO triggered an expression of profound regret by its director, but begs the question, “… and what took you so long?”

Led by President Reagan, the U.S. played hooky from UNESCO from 1984 to 2003 on the grounds that the organization “extraneously politicized virtually every subject it deals with, (and) has exhibited hostility toward the basic institutions of a free society, especially a free market and a free press.” That invites repetition of the old joke, “But aside from that, Mrs. Lincoln, what did you think of the play?

The same sound grounds for withdrawal from UNESCO have been well-publicized for the past five years. Could withdrawal have anything to do, for instance, with past decisions to include the writings of Che Guevara in UNESCO’s “memory of the world” register? The reappointment of Syria to a committee dealing with human rights? Formation of a Unesco chair at the Islamic University of Gaza – an institution tied to Hamas? Or, maybe, giving out a life-sciences award that was sponsored by Africa’s longest-ruling dictator?

While the decision’s timing may have caught Israel by surprise, the decision process had been underway for some time, with Israel’s knowledge and participation. It hardly exposes a grave lack of mutual coordination. Otherwise, Netanyahu could not have joined hands mere hours after the decision became public, thus avoiding charges of collusion between Israel and the United States.

Claiming, typically, to know Americans best, UNESCO’s Director General argued that “universality” drives detailed goals shared by the American people themselves, and should take priority over non-payment of America’s financial dues. Yet Irina Bukova knows that financial withdrawal in 2011 was mandated by U.S. law after UNESCO admitted ‘Palestine’ as a full member. This served as an advance warning of stronger steps to come, despite Secretary of State John Kerry’s personal determination to subvert Congressional intent and restore participation without conditions. Or is Bukova using diplomatic sarcasm to blast Trump for choosing money over human need, an obligation she will oh-so-nobly defer?

Even the New York Times placed the key decision-point in its headline and lead, though bracketed, with quotation marks: “What it (the Trump administration) called the group’s ‘anti-Israel’ bias’. ” Since no one had demanded the U.S. pay up, tying withdrawal to finances may not rise to the level of fake news, but its frequent mention in media coverage amounts to mere journalistic noise.

By contrast, the National Geographic, a long-time apologist for UNESCO, detailed the crucial connection between its mission to protect World Heritage Sites, actual (not merely ‘claimed’) anti-Israel bias and American withdrawal. Having determined in 2001, that the Temple Mount shall be named and referenced as always-and-only a protected Muslim holy site, this summer’s UNESCO decision to contradict Moses and declare Hebron the historic heritage of Palestinians probably served as the tippingpoint to three months of internal American and Israeli consultation.

(below, Cave of the Patriarchs, Hebron) 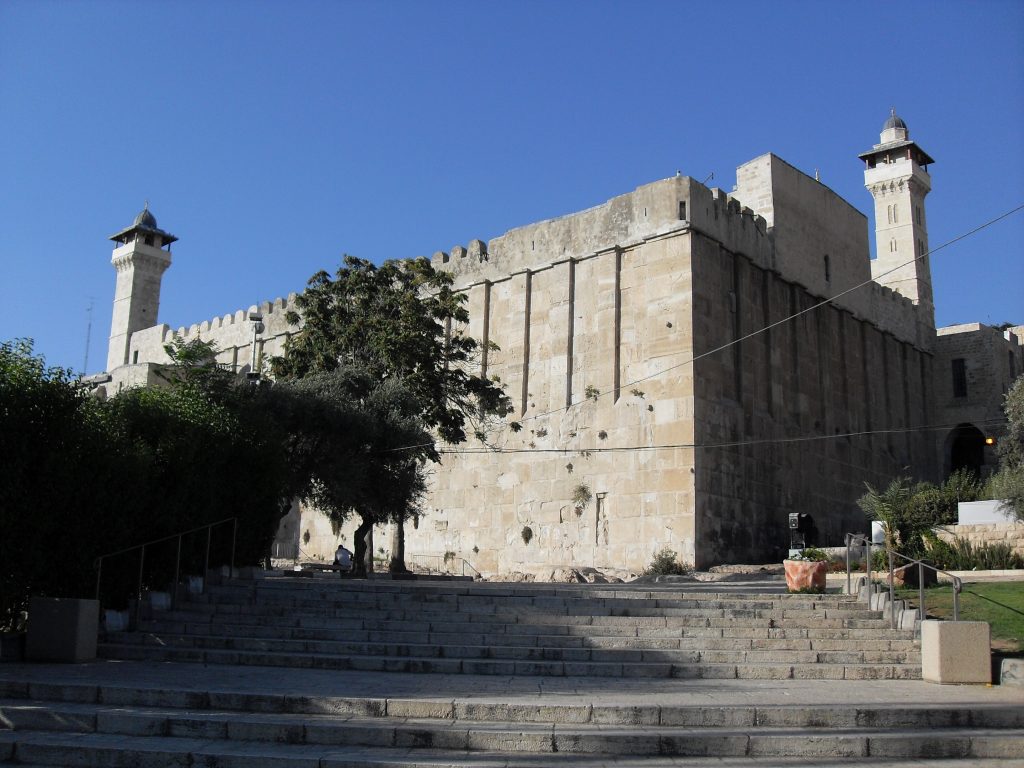 Arguably, the U.S. withdrawal has as much to do with image as substance. Yet, in the U.N. and, even more so, the Middle East, image and substance often prove to be one and the same.

Then again, just possibly the tide may be turning in favor of historic truth over narrative fictions. “I think it’s a catastrophic decision,” said Daniel Rondeau, a former French envoy to the body. “It’s a fracture that seriously jeopardizes the very nature of UNESCO – its universal dimension – and the very concept of multilateralism.” Given the perverse ways that UNESCO defines and acts upon so-called ‘universal’ and ‘multilateral’ values, one can only hope that Rondeau’s fears are justified, and that the doors of this theatre of the absurd will, indeed, close.