How Terror Plays its Game

On June 5th the BDS movement (Boycott, Divest, Sanction) celebrated a supposed victory through threats and manipulation by the PACBI, the cultural boycott branch of the BDS movement. In early June, the PACBI launched a campaign to pressure the Argentina National Team to cancel their friendly match in Israel, which was to take place on June 9th in Jerusalem. The PACBI posted a photo on twitter of an Argentine player celebrating a win, and stated that the team cancelled the friendly match with Israel due to “creative campaigning from fans around the world.” This “creative campaigning” that the PACBI refers to, in actuality, consisted of violent, targeted threats directed at Argentine players and their family members.[1]

The Argentina National Football Team cancelled their preparatory game, not as a political rejection of the State of Israel, but rather in response to horrific threats placed upon the lives of Argentine players and their families. News sources framed the team saying that the cancelled game was “the Argentina National Soccer Team saying no to the Israeli state,” but this is simply not true.[2] 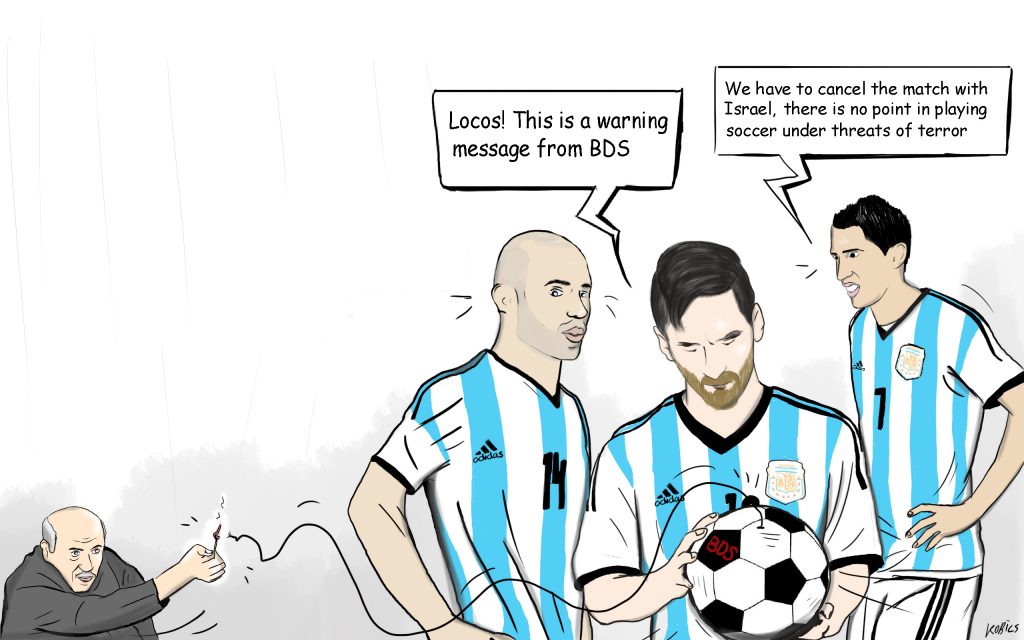 Along with an “extensive public relations campaign led by senior Palestinian Authority official Jibril Rajoub,” which placed pressure on the Argentina team, several terrorist organizations sent “death threats to the Argentine players and their families,” targeting the world-renowned player Messi and his family members as well. Additionally, throughout the PACBI campaign, fans were encouraged to threaten Messi by burning posters of the player if he participated in the match, and to threaten the Argentina National Team members by covering their jerseys with red paint, resembling blood.[3] Gonzalo Higuain, striker for Argentina, told ESPN, “health and common sense come[s] first. We felt that it wasn’t right to go.”[4]

Miri Regev, the Israeli culture and sports minister, stated that the cancelled game was due to Palestinian terrorism,[5] describing that the alarming Palestinian threats directed at the Argentina National Football Team included “video clips of dead children.”[6] Regev stated, “This is the same terrorism that led to the murder of eleven slain athletes in Munich. This is not BDS, but a terrorist incident that intimidates the athletes themselves.”[7]

Jorge Faurie, Argentina’s foreign minister, confirmed this report by saying that the threats that the Argentine players were bombarded with were worse than ISIS’s terrorist threats.[8] He also said that there were alarming protests outside the team’s practice facility in Barcelona on Tuesday, with protestors holding Argentine jerseys stained with red paint depicting blood.[9] The head of the Argentine Football Association, Chichi Tapia also confirmed that the players “faced serious threats, which forced them to cancel,” and the team would plan to “play in Israel at another time.”[10]

The Israeli Embassy in Argentina tweeted about the event: “The threats and provocations directed at Lionel Messi, which logically aroused the solidarity of his colleagues and fear of playing the friendly [game] are no strangers to the daily life of Israel’s civilian population whose sporting stars, to put it simply, have been on numerous occasions the targets of violence and attacks.”[11]

By celebrating the cancelled game as a win for their agenda, the BDS showed its true colors—the BDS plays an unfair match, and only wins with manipulation and terrorism.